When my husband, Jim, was in the army, one of his duties was driving the mess truck—a 2½-ton vehicle, commonly called a deuce and a half. I’ve heard it said that the guy who brings the food to feed the troops’ empty stomachs is one of the most appreciated people in the army. I’m sure there’s a lot of truth in that.

Jim described what it was like to drive in a convoy through thick woods in the dead of night without the use of headlights. Small red taillights of the vehicle in front of him guided his way, and were the only thing he could see in the pitch-darkness. Often, hitting potholes, washouts, and rocks was unavoidable and elicited complaints from the men riding with him. But, no matter how rough the road, he couldn’t risk slowing down and losing sight of the red taillights. 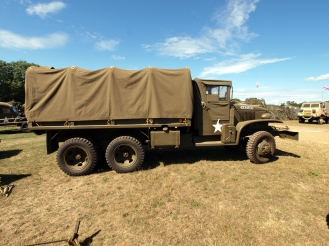 The deuce and a half seemed to fascinate the men, and many of them begged Jim to let them drive. Who knows, maybe the novelty of driving a large army vehicle fulfilled a boyhood dream. Whatever the reason, they got a kick out of slipping behind the wheel and bumping down the road in the old beast.

Hank Fleming, the hero of my latest novel More Than a Soldier, is a former Spec Ops demolitions man who had begged to drive his buddy’s deuce and a half while in Afghanistan. Later, while driving in a convoy, the truck was hit by a rocket-propelled grenade, leaving Hank the sole survivor in the attack. Now, several years later, latent PTSD sets in and manifests in nightmares that make him relive the explosion that took the lives of several men.

When Hank meets Cindy Giordano, his foster brother’s biological sister, he falls hard and fast for her and sets out to win her heart.

Cindy finds herself drawn to Hank, but she’s instantly wary. With her ex-fiancé’s betrayal still fresh in her mind, friendship is about all she can muster.

When shadows from Cindy’s past threaten, Hank’s protective instincts go into high gear, and he realizes everyone has their own battles to fight. But the road to healing would be much sweeter with the right person by his side.

“It’s nice to be a passenger for a change and be able to kick back and enjoy the ride.” Cindy’s lazy half-smile oozed with serenity.

“Good, I’m glad. You— Whoa, did you see that?” Hank slowed the Jeep and pulled onto the shoulder.

Cindy dropped her feet to the floorboards and twisted around in her seat. “See what?”

He backed up, stopped, and pointed to a smallish sign that barely stuck up over the roadside shrubbery. “That.”

“All-you-can-eat pancakes, all day long, six ninety-nine,” Cindy read aloud before looking back at Hank. “So?”

“What do you mean, so? I thought I saw a halo floating over that sign as we passed.”

Cindy laughed. “I take it you’re a flapjack fan?”

“Fan? You have no idea.” Hank put the Jeep in gear and merged back onto the road. “I love pancakes. Can’t get enough of ’em. Let’s go shut that place down for the day.”

7 thoughts on “An Army Marches on its Stomach”